Starry Night is arguably the most iconic work of world-renowned painter Vincent van Gogh and probably the most recognizable paintings in the history of art, too. Countless paintings, pop culture references, books, and songs are inspired by this magnificent work of art. It is indeed one of the most interesting paintings to study and knowing the history behind it would make you appreciate the painting and the painter even more. Continue reading this article if you wanna know more! 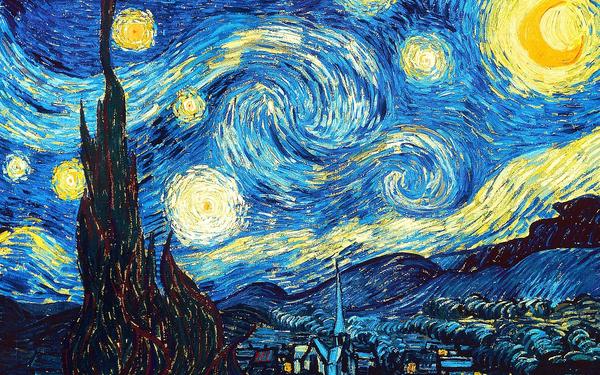 An American singer-songwriter named Don McLean wrote a song about Van Gogh and the song begins with the lyrics, “Starry, starry night, Paint your palette blue and gray, Look out on a summer’s day, With eyes that know the darkness in my soul…” This song is just an example on how Van Gogh’s Starry Night is influential in pop culture and alike. During his lifetime, van Gogh isn’t considered as the person we know today: artistic, talented, creative with a dash of madness. In fact, he didn’t experience much success as an artist and he was financially incapable of supporting himself so his brother Theo supported him until his death. Thus, the only known painting that he sold during his lifetime was called The Red Vineyard in 1890, shortly before his death for merely 400 francs. Nonetheless, during his short life, he tried to give happiness by creating beauty and showcased that unconventional things can be beautiful too. Despite his little success, van Gogh still tried to pursue his dream by painting over 900 paintings (excluding the drawings and sketches). Truly, Van Gogh is one of the most inspiring painters in the world and his creativity will resonate with us forever. Before we begin discussing the history of the painting, let us have a quick overview about Van Gogh.

Van Gogh: The Life of a Great Artist 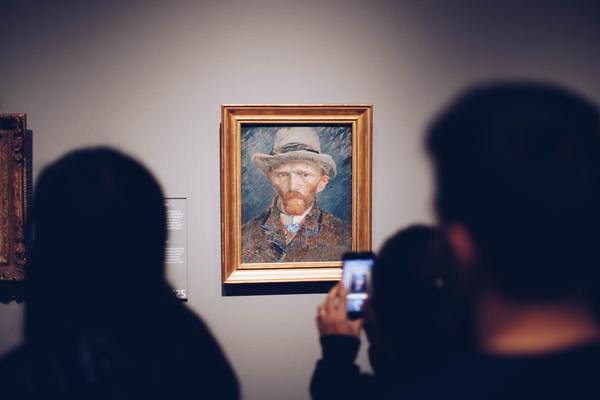 On the 30th of March 1853, Vincent van Gogh was born in Zundert, Netherlands, and he was the offspring of Theodorus van Gogh, a church pastor, and Anna Cornelia Carbentus, an artist. Growing up, van Gogh’s family struggled financially so he was forced to leave school and take a job at his Uncle’s art dealership at the age of 15. In 1873, van Gogh was transferred to London and there he fell in love with the English culture, which made him a fan of art galleries as well as the writings of Charles Dickens and George Eliot. At the time, he also met a landlady’s daughter named Eugenie Loyer. She was offered a marriage proposal by van Gogh and when she rejected the proposal, he suffered from a terrible breakdown which caused him to throw away all his books except the Bible.

Shortly, he started to follow his father’s footsteps by becoming a preacher however, the evangelical committee were not so pleased with van Gogh’s lifestyle so his life as a preacher was cut short around 1878, forcing him to find a new occupation.

During the fall of 1880, van Gogh decided to move to Brussels and follow the footsteps of his mother–to become an artist. He has no formal training whatsoever but he decided to study on his own through the help of books. Meanwhile, his brother Theo supported him financially as he pursued his goal. His most famous early painting is called “The Potato Eaters,” which was completed in 1885 and considered as one of his greatest early paintings.

In 1886, he moved to Paris to join his brother Theo, the manager of the Goupil’s gallery at the time. He met impressionist artists like Gaugin, Monet, and Pissarro. In 1888, he decided to move to Arles and hoped to build a school of art with the help of his friends. Gaugin did join him at ‘The Yellow House’ but it didn’t last long due to van Gogh’s nervous temperament. Gaugin decided to part ways and leave Arles in 1888 which led to the mutilation of van Gogh’s left ear.

Van Gogh experienced nervous breakdowns frequently so he voluntarily sent himself to the Saint Paul asylum in Saint Remy, France. In that asylum is the place of creation of the Starry Night, which will be discussed more later.

After spending about a year in the asylum, they thought that he was finally in a better mental health state so he went out to live in Auvers-sur-Oise under the surveillance of Dr. Paul-Ferdinand Gachet. However, two months later, he died from suicide, from what is believed as a self-inflicted gunshot. Many believed that the final words that he uttered were, “the sadness will last forever.”

The Story of the Starry Night 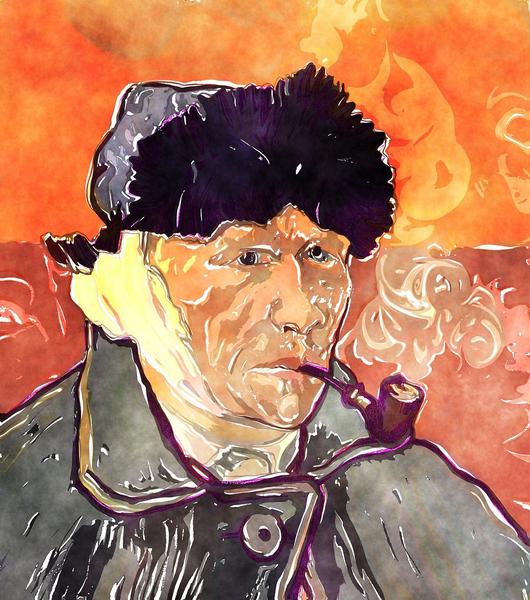 Starry Night has a very deep history and it all started during one of the days in 1889 when he stayed in Saint Paul Asylum in Saint Remy, France. His stay at the asylum was voluntary after his experience of a mental breakdown as well as the mutilation of his left ear. The inspiration of the painting is a view from his bedroom’s window, facing east; he wrote a letter to his brother Theo saying that, “Through the iron-barred window, I can see an enclosed square of wheat… above which, in the morning, I watch the sun rise in all its glory.”

Dominated by the blues and the glistening yellow moonlight, this oil on canvas painting is considered as Post-Impressionist characterized by thick impasto brush strokes. Accordingly, van Gogh painted several variations of the painting no more than 21 times, including few night scenes such as the Starry Night (Rhône) which has the same color scheme but differs greatly in the painting style.

During his stay at the asylum, he watches the night sky at his bedroom’s window where he took  inspiration for most of his paintings. He also depicted the view at different times of the day and at different weather conditions too. He was only able to make sketches through ink or charcoal. It is unclear on where the actual painting process of the Starry Night took place, whether it’s in a studio or outside. He once again wrote another letter to see his brother stating that, “This morning I saw the countryside from my window a long time before sunrise with nothing but the morning star, which looked very big”.

Art critiques and researchers determined that the brightest “star” near the cypress tree is actually the planet Venus, which was visible at dawn in Provence during the spring of 1889. The moon’s depiction of the painting, however, was not astronomically correct. Regardless, the painting is still considered great due to the variety of textures and the intense hues of the color, making it remarkable among its contemporaries.

Sadly, van Gogh actually considered this painting a failure and did not like it compared to his other paintings such as the Wheatfield, based on the letter that he sent to his brother. This painting was one of his last paintings before his death the following year in 1890.

Did you feel inspired by van Gogh’s sad yet inspiring story? Do you wanna learn how to paint like the master painter? Well, Best Paint by Numbers has a very good offer for you!

We offer a *FREE* Starry Night Paint by Numbers kit and you can check it out just by clicking here! All you have to do is pay the shipping fee at the check out and wait for the kit to be delivered right at your doorstep!

We also offer 30+ Van Gogh-inspired Paint by Numbers kits for only $28.95 USD! Click here to see the van Gogh paintings that you can paint perfectly just by following a simple instruction: MATCH THE NUMBER ACCORDING TO ITS CORRESPONDING COLOR.

It’s widely known that art is powerful. Art has a special power that sometimes is unexplainable with terms that humans can understand, whereas sometimes with

Best Paint By Numbers Images To Use

Hook: Paint by number kits are fun when you’re looking for a new hobby, but the common kits can get boring soon. Here are the

Make your dog’s life better with these accessories

Having a pet takes up a lot of responsibility. You have to take care of your pet, just like you would take care of a baby of your own. You need to show that you love them and their company. You need to make your buddy feel safe and of course, provide the necessary things for him/her to live well. Apart from food, water, and health care, dogs like having a kind of more luxurious life. They enjoy being treated well and with the latest technological advancements, you can give your dog the life he/she deserves.

Veggies that Benefit your Pup’s Health

A healthy dog is a happy dog. Thus, we usually treat our furry pals the same way we do our fellow human beings. In this article, we will provide a list of dog-friendly veggies that are proven to be nutritious and beneficial to your pup’s health.

One of the most fun things as a dog owner is that you get plenty of chances to spend a day out with your dog. Of course, you can’t just do the same things over and over again, so it would be ideal to have a bucket list of pet-friendly adventures that you and your furry buddy can indulge in. If you need help in creating a bucket list, worry not because we got you covered. In this article, we will provide several suggestions of different activities that you can enjoy on a perfect day out with your fido.

Changing Hobbies For Your Mental Health Through Art

September, which is Suicide Prevention Month has come and passed, but that doesn’t mean that the world stops caring about your mental health. We can’t